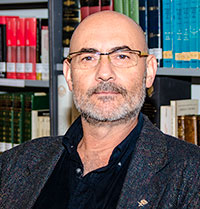 Rafael Aleixandre is an accredited Full Professor of Library and Information Science and a Tenure Scientist in the Spanish Research Council-CSIC. He holds a MD degree on Medical Documentation of the University of Valencia and he is currently head of the Research and Information Unit on Social and Health Issues (UISYS) of the University of Valencia.

His principal research interests are focused on the evaluation of research and scientific publications, as well as the addiction studies. He is collaborating in training and research in several Spanish and International Universities and he has conducted research projects of the Spanish Plan on R & D & I, the Valencian Autonomous Government, the Valencia City Council and several foundations and professional and scientific associations. He has completed research stays in Lyon (France), Stellenbosch (South Africa), Vienna (Austria), Santiago (Chile) and Florianopolis (Brazil).